My son turned 7 this weekend and he wanted a Wizard101-themed birthday party.  Wizard101 is an online game that the whole family can play together.  We can even play with family members that live on the other side of the state!  Yay for technology.

Decorations
The main decoration was on the wall in the kitchen where most of the party stuff happens.  I strung some (Christmas) lights, made a banner, and hung some maps from the game on the wall. 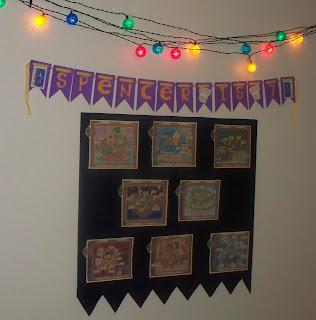 I incorporated images of the birthday boy's game character onto the purple and yellow banner.  The maps are screen shots from the game, printed out and taped onto some black wrapping paper.  (Just hit your PrntScr key to generate screen shots. You can also download some wallpapers from the Wizard101 site here to use as decorations for your party.)

Anyone who has played Wizard101 knows you have to keep track of your health, mana and energy.  So they should recognize this: 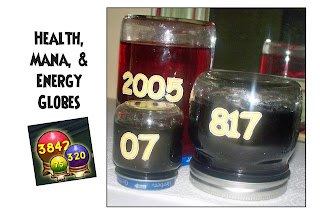 I just pulled various-sized glass jars from the recycling bin and filled them with water and food coloring.  I typed the numbers in Word, printed them, and cut them out.  I used the numbers from his birth date and age to make this decoration.

The health, mana & energy globes were displayed on the mantel with an owl (dressed up like Gamma from the game) and a wizard hat. 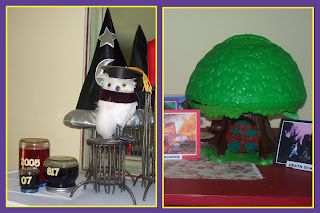 My mother made the Bartleby tree by forming his face out of green & brown clay and sticking it on an old tree-shaped toy.  She also made signs of her characters standing in front of each of the schools in Ravenwood and set up the signs around the grandfather tree.  (And now you see where I get my crafting tendencies!)

Activities
You advance in Wizard101 by completing "quests" so I designed 4 quests for the kids to complete. 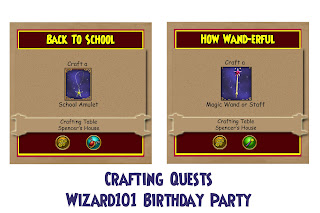 As the kids arrived, they were directed to the "crafting tables" where they could make a necklace with the school symbol of their choice and a wand.  For the necklaces, I printed multiple copies of the school symbols and punched them out with a 1" circle punch.  The kids glued the symbols into a bottle cap.  I helped them punch a hole in the bottle cap and attach a jump ring, then they threaded the bottle cap charm onto a ball-chain necklace. 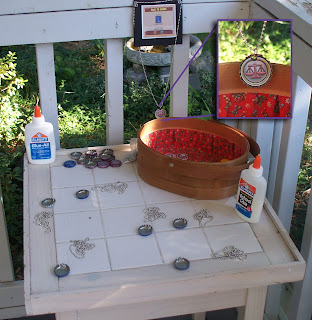 For the wands, my husband provided some sticks from the yard and the kids decorated them with all sorts of craft supplies. I gave them foam shapes, ribbons, feathers, sequins and jewels, pipe cleaners, colored tape, and anything else I could find in the craft closet. 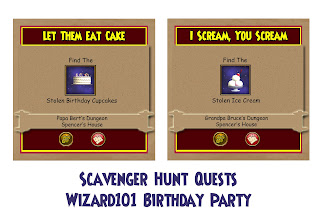 After dinner, I announced that the cake and ice cream had been stolen! I involved the grandpas as the "bad guys". The kids divided into two teams. One team had to recover the ice cream by finding 5 "potion ingredients" (beads in small canisters) to make a potion to put the dragon (plastic toy) to sleep and get his key. The other team had to recover the cupcakes by finding 5 puzzle pieces, and assembling the puzzle to get the password. With the key and the password, they could enter the dungeon (kitchen) and have cake and ice cream.


The birthday boy requested chocolate cupcakes with purple frosting and yellow stars & moons like Merle Ambrose's hat.  I made little picks with the school symbols on them to stick in the cupcakes as well. 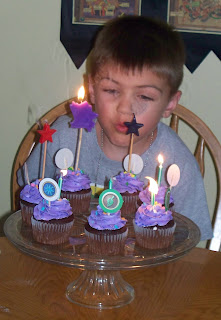 Food
My son is a big fan of chicken drumsticks.  We love to battle against the prince and barons in Colossus Boulevard because they use drumsticks as their wands.  That was the inspiration for the main course for dinner.  Then I was looking at some of the "pet snacks" I had collected and decided I could use those as party food, too!  Here are the labels I made for the food table. 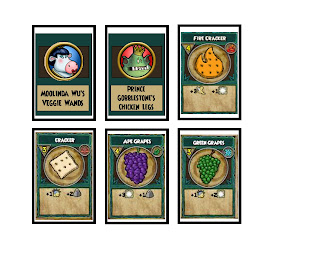 The "fire crackers" were Doritos and the "crackers" were saltine crackers.  I cut carrots and cucumbers into sticks and named them "Moolinda Wu's Veggie Wands".

We offered Sprite and Root Beer to drink and I made some labels to wrap around the 2-liter bottles as well. 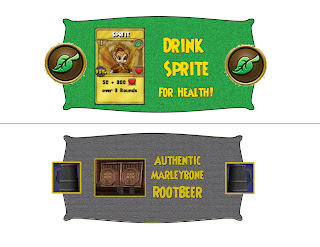 Favor Bags
The party favors were packaged in blue paper lunch sacks.  I printed labels for them with the Ravenwood crest and each child's name.  The prizes inside were a wizard rubber ducky, a bouncy ball, a glow stick, candy that looks like potion bottles, and Cracker Jacks (with a pet snack label). 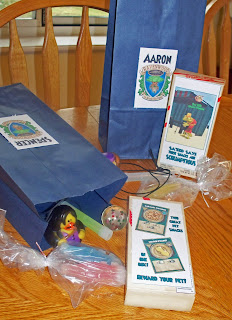 It was so much fun to put this party together for my sweet 7-year-old.  And I think the kids enjoyed themselves, too!
Posted by Kristen at 8:24 AM

Kristen
My mother raised me with the mantra "Use it up, wear it out, make do, or do without." As a SAHM of 2 boys, I try to be a good steward of the family's money. In this blog, I share some of the things I make and do.